I’ve had a lot of issues figuring out the material fabrication for my project, as I initially envisioned my final project being printed in metal. Given the size of my desired final outcome (2.5-4 feet long), printing this in metal is a bit out of my price range and access of current fabrication methodologies.

Although completing my project in metal now will likely not be feasible in the next couple weeks, it is encouraging that metal 3D printing technologies are rapidly advancing.

“A recent accomplishment by researchers at NASA’s Jet Propulsion Laboratory, the California Institute of Technology, Pasadena, and Pennsylvania State University, University Park, could have staggering implications for manufacturing in general, over the coming years. What they have managed to do, is figure out a way in which a part can be 3D printed out of several different metal alloys. For instance, a jet engine component could be printed in one piece with several different properties throughout. The area of the part which directly makes contact with a heat source, could consist of a metal alloy which can stand up to higher temperatures, while the opposite side of that part could consist of a metal with less temperature resistance, but be lighter, stronger and less dense, to cut back on weight.

The actual printing process is foreign to anything we have seen in the past. Instead of depositing metal or sintering a bed of metal powder layer-by-layer, like other additive manufacturing methods, the researchers created a printer which deposited the metal via a sintering technique on a rotating rod, meaning that the inside of a part could consist of a different metal alloy than the outside, or there could even be several different metals within a part. The actual head of the printer features 4 powder blowers, allowing for multiple metals to be melted via a laser, without the need to change out the metal type, making the process a smooth and uninterrupted one.” 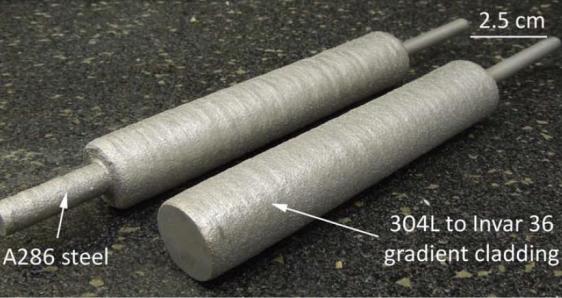